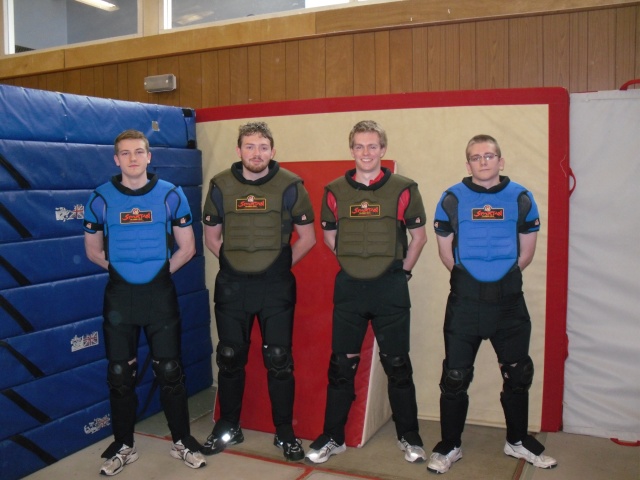 A call to arms with which anyone who has watched the American sitcom ‘How I met your mother’ will be familiar.  The character Barney Stinson (played by actor Neil Patrick Harris), a suit aficionado, often tries to get his friend Ted to don a suit and head out with him to chat up the ladies of New York city.

For Barney Stinson the suit is like a superhero’s costume.  To him it is a symbol that separates him from the pack.  When he is suited up he is in the zone, on top of his game and ready for action.

Do we as martial artists suit up?

I frequently see a change in attitude when Karateka don their gi and belts.  The gi is a symbol that separates the activities and attitudes in the dojo from the real world.  It helps us focus and often the presence of our peers also in uniform around us reaffirms and reinforces our sense of purpose and awareness in training. The man standing in the gi is more alert, sharper, and radiates a greater sense of confidence than the tired man in the changing rooms at the end of the working day.

I see the same mental shift in gear when participants in some of my training don full body armour.  There is a frisson of nervous energy, the sense that someone really is going to be trying to hit them, the level of awareness increasing as a result.

I’m sure that even in classes or training where no set uniform is required, the donning of training shorts, the wearing of a particular type of clothing, all help the wearer focus their mind on the serious business of having fun through training, even if it doesn’t seem like fun at the time.

The thing about Barney Stinson is that it doesn’t matter whether it was a real suit, a flight suit, a penguin suit or even his birthday suit, the suit was merely a facade – he was the superhero he believed himself to be all along.  His action of suiting up was a mental not a physical process.

One of the more popular action movie series of the last decade has been Chris Nolan’s Batman trilogy.  One thing that was highlighted at the end of the first movie, Batman Begins, and throughout the trilogy is something that fans of the comic book hero have known for some time: Bruce Wayne is the mask, the false identity.  Throughout all three films we see the character engaging in espionage, fighting, training and saving lives without the suit or mask.  When Selina Kyle dances with Bruce Wayne in The Dark Knight Rises and asks him who he is pretending to be, his answer “Bruce Wayne” is both tongue in cheek and honest.  Batman became who he was through a traumatic event, his reaction to it, the training he sought out and his experience ‘in the field’.  The bat suit is a symbol, a tool, and a form of protection for him and those he cares for, but whether he is wearing it or not he is always the Batman.

We are no different.

Whether we wear tracksuits, doboks, Gi or shorts we are always the people we become in those uniforms, we just need to give ourselves the permission to ‘suit up’ at will.  Wherever we are, whatever we are doing, we must be able to step up, change gears, switch on or suit up in an instant.  If our clothing is our trigger then we need to disassociate, and not only choose new external visual or aural triggers, but also internal ones that we can activate ourselves at will to create that altered mental state.

“When you stop believing the suit makes you who you are, and realise you’ve been that person all along, you become awesome.  True story.”